The video Monument Reflecting the City uses the red granite surface of the monument of the 'Croatian independence' in Split, erected by the conservative parties, as the main aesthetic and narrative element of the video.

The visual 'narrative' is created through mathematically determined set of rules, where the camera, which is always placed on same 4 positions, documents the 4 diffe-rent sides of the sculpture, alway at each full hour for 30 seconds, from dawn till sunset.

It captures the light changes and the circulation of people around the area, reflected on the  granite surface,  that serves as a sort of a "filter" through which we can get a glimpse of a specific corner of public space.

In such way, the red 'filter' signifies the alarming political situation of purposeful shrinking of public space and cultural areas through corrupt privatisation and expansion of mass tourism, processes that are often related to the branding of the - conservative politics driven -  national identities.

The large number of tourists in high season, along with the emigrating local population are two opposing realities of many croatian cities.

The juxtaposition of image and sound composition in the video establish sensoric codes that contribute to the  'haptics' of the video. Such abstract coding establishes a feeling of a space inside of the monument, space of the unknown or even of a threat from 'within'. 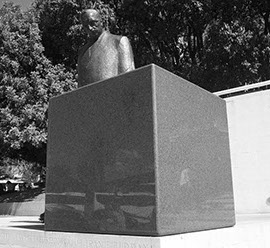 shpwn with the work Split Dioptre

More about the context of the monument

After the end of Yugoslavia, the city of Split has been largely subjugated to global mass tourism and gentrification on one hand, while deepening the local patriotism and nationalism on the other - one such example being the creation of national identity through, on one hand, neglect and deterioration of cultural heritage of social modernism and simultaneous erection of traditionally sculpted, conservative monuments for the 'new nation' and its first president, for which often no open call for participation or professional artistic framework has been created.

These processes appear hand in hand with commercializing the public space by non-transparently taking it from the citizens into the service of accumulation of capital.

Such is the example of the monument that plays the 'main role' in the video- the monument celebrating the "father of the nation", the figure of Franjo Tudman, casted in bronze and resting his hand on top of a large red granite cube- inspired by the national coat of arms.

Such celebration of the image of Franjo Tudman can be traced to national - conservatism of the local  political climate, and a strategy to "erase history" and with that forget Tudman's involvement into the Balkan war-crimes and his Hague Court indictment.